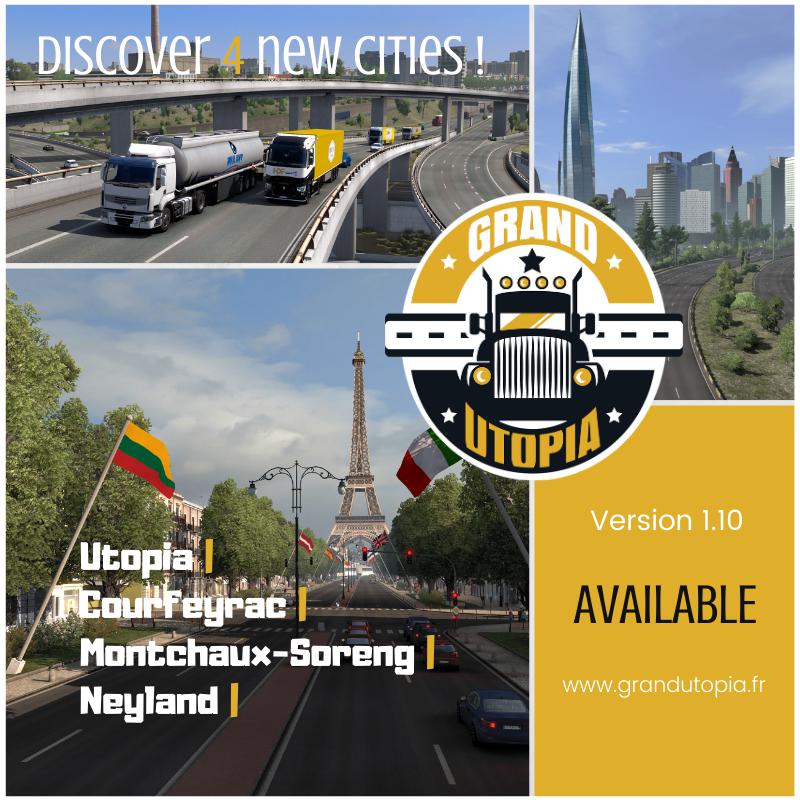 This update focuses mainly on the creation of the capital of the island: Utopia. The latter is divided into several districts connected to each other by a ring road as well as other roads. Some parts of the capital are however missing. I did not want to delay too much the publication of this version. Therefore, the port district and the Governor Island are not yet available but will be available in later versions.
In addition, this version brings three new villages: Neyland, Montchaux-Soreng and Courfeyrac. Both are located on the D21 road linking Utopia to the Paradise road.
The village of Aix-Noulette-sur-Hulluch has also been enlarged.

ETS COMPATIBILITY
That v1.10 version was made under ETS 1.39 but, as far as you know, SCS Software just released the 1.40 beta. As many people already tried successfully Grand Utopia v1.9 with ETS 1.40, the Grand Utopia 1.10 should works with ETS 1.40 beta.
In any case, know that when the offical and stable version of ETS 1.40 will be ready, a corrected version of v1.10 will be published. I will take advantage of this lapse of time to fix the bugs that will be reported to me in the meantime.

DBUS WORLD READY
Another feature of this version is that Grand Utopia is now DBus World Ready. This means that as soon as the mod developed by Domcek and Etrusan will be available, you will be able to use it on Grand Utopia.
In this sense, several lines have been created across the map including an urban line for the city of Utopia. Other lines will be added as updates are made.
For more information on this mod, I invite you to visit their website: https://dbusworld.com/.

VTC
Version 1.10 also marks the arrival of many VTCs directly integrated into the mod. You can find the complete list of these virtual companies on the Grand Utopia website.
I especially thank all the people who have trusted and supported me by setting up their company on Grand Utopia. Thank you
Of course, the VTCs are playable by all as the default companies of the game.

LANDS FOR CUSTOM WAREHOUSES
The land for sale has been a victim of their success and a lack of available space has emerged. New lots are obviously available with v1.10.

END OF SPONSORIZED VILLAGES AND CITIES
Also victims of their success, it is no longer possible to name a town or village. Indeed, I currently have many names of villages and towns on hold. Enough to finish the island of Grand Utopia.
Once again a big thank you to all the donors for their support.

LOVE AND SUPPORT
I will finish this post by reminding that this free mod is created on my free time and represents at this stage about 3,000 hours of work. So, if you like Grand Utopia, don’t hesitate to support me by participating to the fundraising on PayPal :

Thank you all for keeping Grand Utopia alive.