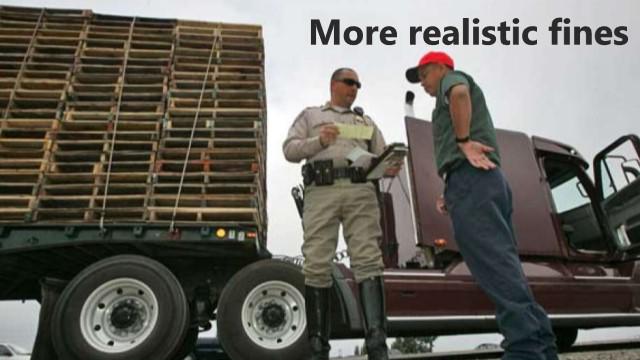 Description:
This mod aims to make your ETS2 driving more realistic by changing the way fines happen.
Basically, you won’t get fined out of nowhere as if somebody is watching you all the time. Also fines have been adjusted to German traffic laws.

However, if there is a police car present, you will get fined for all the offenses (wrong way, using the hard shoulder, speeding, etc.). Note that there is only a 10% chance you are fined for avoiding sleep to emulate the rare police traffic stops.
I also removed the 2x increase in the amount if police is nearby, the amount should match the law, not double just because. In fact, in real life some countries have a discount for immediate or prompt payment.

The alternative was to turn off traffic fines completely, but that does make it even more unrealistic. Truck drivers in real life are able to speed and run red lights, but they also get fined if they get caught.

I made this mod thinking about my playstyle, and as it turns out it matches it perfectly. The rare crash with IA I get is minor, frequently the IA’s fault, and the game already punishes you enough with the amount of damage you get. Same with speed, real drivers aren’t punished (or not punished as much) if they go 1-3 km/h faster than the limit, but as this is not easy to implement, lowering the chance of getting caught works about the same.

Mod should work with any other mod unless they change the way fines work.