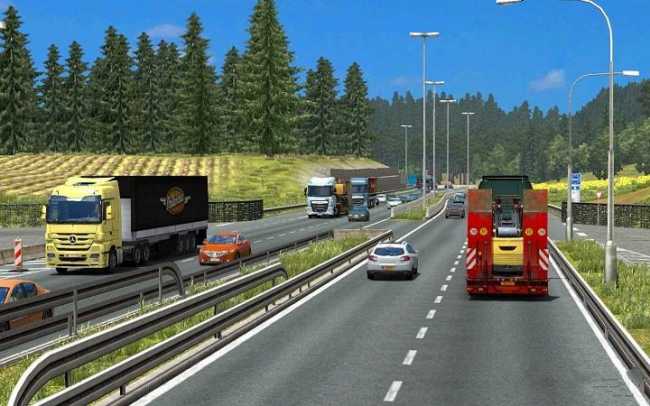 Description:
Version 1.30d:
– increase in density in cities and highways;
– more cars during peak hours; more trucks on motorways outside the rush hour;
– less traffic on local roads, improved overtaking conditions;
– the frequency of traffic for a small increase in FPS is reduced;
– traffic light is switched on in bad weather and switched off to sunny and with low clouds;
– reduced the frequency of the appearance of slow transport (tractors and combines).

The following parameters are implemented:
– density and traffic intensity changes every 2-3 hours ;;
– high density in the morning and in the afternoon with the subsequent gradual decrease by the evening. Peak flow occurs at 8:30 and 17:00;
– high density on motorways during the day and low at night with a minimum from 00:00;
– relatively high density on local roads, variable frequency allows you to easily overtake;
– Proportional ratio of transp. means;
– very low traffic density on local roads at night;
– improved cycle of traffic lights at all intersections (two types of cycle);

– Up to 3 seconds the duration of the yellow after the green is increased in order to avoid emergencies;
– The duration of yellow after red is reduced to 1 second (be careful!);
– the cycle of work of traffic lights on road works is changed, red burns for 12 seconds.

It is recommended to place density and intensity modes in priority with respect to cards and traffic packs.