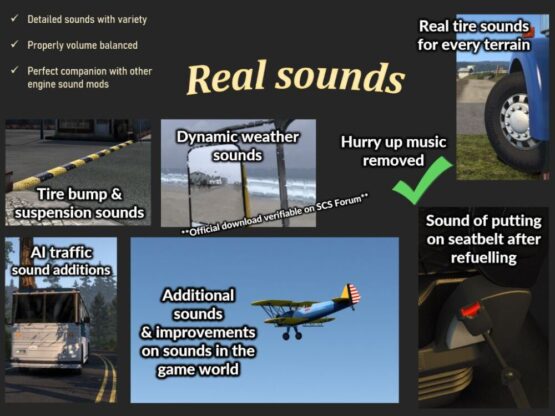 3 new variations of lift axle switch sounds in the interior view for the default lift axle sound.
Engine and horn sounds added to the 1951 Oldsmobile 88 in AI traffic. [ATS edition]

Optional mod support for Convoy confirmed to be kept for this mod – tests with multiplayer sessions are successful.

– Pack provides essential improvements to common sounds in the game for increased immersion.
– For over 6 years, this mod has proven to be a welcome addition for anyone wanting an immersive experience.
– The Steam Workshop version is highly recommended for quick and easy updates, maintained for the current game version.
– The mod is the most safe on the Steam Workshop, having procedures in place for adapting to major game updates.

* ETS2 1.45.1 + ATS 1.45.3. No errors in game log. Must have high priority in Mod Manager.
* Supported in single-player and multiplayer Convoy mode, and is marked as an optional mod in Convoy.
* Compatible with all maps and all trucks, including truck mods.
* Does not replace individual truck sounds, so this mod can be used with an unlimited amount of truck sound mods of your choice.

For further realism, the mod may also add official colors to each AI traffic vehicle it modifies for sound, with rarer colors less likely to be seen.