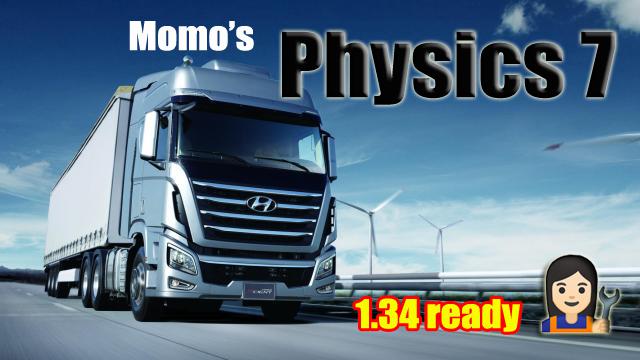 Description:
** Mod version 1.1 Update:
– Hot fix for New MAN Euro 6 game crash. From now on this mod only supports 4×2, 6×4 and 8×4 for New MAN Euro6. When you buy New MAN E6, do not buy with 6×2, 6×2/4 or any 6×2 based.
– Reduces the maximum cabin roll angle (as suggested by a real life truck driver).
– Differentiates between older and newer truck models by increasing front suspension softness of newer models by 25% (as suggested by a real life truck driver).
Trucks considered to be in the newer model group are:
New Man E6, New Gen Scania, Volvo 2012, DAF E6, Highway, Actros 2014
You will find these newer models to be a little bit softer than older models in some situations. This brings the game to another level of realism.

This is the full version of Physic’s 7 Mini. The difference between the 2 versions is:

PLEASE KEEP IN MIND THAT:

1. This mod aims to be natural, realistic and close to real life truck as much as possible.

2. No mods can fix the SCS’ road surface too smooth problem. When you drive with this mod you have to keep in mind that SCS’ roads are unrealistically smooth. So there is no way that your truck will bounce all the time like on real life roads. Most other physics mods make your truck shake too freaky and insane. This mod makes sure that your truck responds naturally and realistically to each bump, corner SCS offers.

3. All 8×4 models are intentionally made harder suspension to prevent the nose dipping too low.

4. This mod works best with the default value of “g_suspension_stiffness” and “g_truck_stability” if you have adjusted those values before, please make sure you reset them to default before you play with this mod.