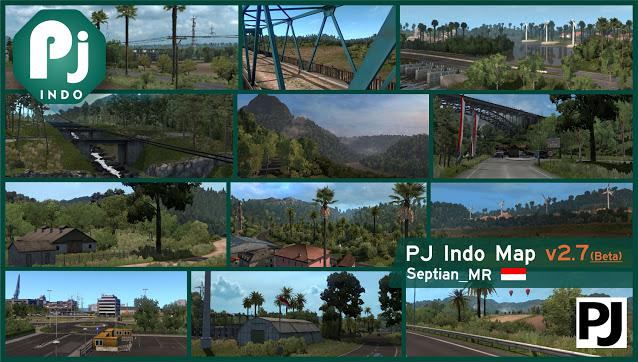 Description:
The new side of Indonesia fictional map with fresh nature and chalenging roads. It is the new parallel world of Indonesia.

Changelogs:
– Compatible for Euro Truck Simulator 2 patch 1.38 and above (1.39 open beta)
– MAJOR REBUILD over western part of south region/island (Part-1)
– Improved two exsiting cities in north island with new map assets
– Added A LOT of new map assets and models for this map (will be used for my next real Indonesia Map)
– Fixed some bugs

Notes:
– Not require every map DLC’s (you can use this map with or without map DLC, even if you don’t have completed one).
– Compatible with so many add-on maps (for global map combos).
– This map can be switched into stand-alone map (see ReadMe for details)

Special thanks to:
SCS as game creator of ETS2 and ATS, some Indonesian modders for my ideas of new map models